An Iconic Venue Steeped In History …

The Imperial at Clifton. The next chapter.

It all started way back in the 1900s with a sizeable mining community looking for a drinking hole…from there an iconic venue was born, known for its clifftop location and dynamic history.

For decades, the Imperial Hotel was an important part of the coastal township of Clifton, both for the local mining and rail community, as well as for visitors to the region until it closed its doors in the early 2000s.

Sitting idle for almost 20 years, the venue was reinvented as The Imperial at Clifton in 2021 – a bespoke hospitality venue encompassing a restaurant, café and events space.

Embracing the historic roots, the venue brings to light the story of not only the iconic building, but also the town of Clifton. There are heritage features and historical interpretations everywhere you look – climb the original timber staircase, take a seat on the reinstated front terrace, cosy up to one of five original fireplaces and immerse yourself in the next chapter of this iconic venue.

Mickey, a 43 year old cheeky corella parrot, moved to The Imperial in 1956 with Jack and Rube Hargrave when they became licensees. More than just a pet, Mickey was an integral part of The Imperial and even had his own room on the ground floor.

Well known for his charity work, each Sunday Mickey would ask Rube “You all right? You ready?” and collect pennies in his beak. Always polite, Mickey would say “thank you” to anyone who donated and drop the pennies into his collection tin. From 1956 to 1970, 10 pounds was donated every 7 weeks to a local children’s charity.

Before the local court was built in 1886, The Imperial was the venue for trials and inquests. Bodies found in or near the ocean were brought to The Imperial for identification and the inquest that followed. In fact, The Imperial remained where coronial inquests were held well into the twentieth century including when a tragic accident of a miner at the local coal mine happened in 1914.

Before the 1950s, women were only allowed in the Ladies Lounge or Parlour area of all hotels, not into the ironically named ‘Public Bar’. The Parlour did not have its own bar, but had a servery with a special hatch through which drinks would be served to customers.

The first spirit thought to take up residence at The Imperial was that of man washed up on the shoreline in 1901. The local police brought the body up to a table near the bar of The Imperial and it is said that he still is holding up the bar to this day.

Also keeping an eye out is Emily, wife of licensee George Miller, who sadly passed away in her bed in 1914. It is reported that her presence wanders the halls, keeping an eye on the tidiness of her old home.

Wilfred Grievson met his fate as a result of bravado and venom in 1913. Another local, Frank Tully, brought a tiger snake he found into The Imperial. After much debate about whether the snake was poisonous, Frank tried to grab the snake and was bitten on the finger. His friends encouraged him to see the doctor but he carried on with his beer and banter and later passed away. Wilfred likes to walk around, opening and closing doors, while holding his finger, of course!

Quoits games at The Imperial attracted a huge following. The ‘Quoit Pit’ regularly attracted crowds of over 500 on Saturdays and much like football or cricket today, newspaper coverage was extensive and matches became quite heated!

When the Coal Cliff Mining Company was formed in 1877, weatherboard cottages were erected around 1km south of the mine to house the miners and their families. This area became known as “the village of Clifton”.

Local facilities for the village soon developed, including a post office, school and an inn. A 500 foot jetty, complete with a 120 foot slide down the cliff, welcomed two purpose built steamers to transport coal.

The Imperial hotel was built in 1884 and it was reported at the time that the Clifton population was ‘near 1000 residents’, many of whom worked at the mines.

The end of an era occurred in 1991 when the mine closed, unable to compete with larger mining operations. 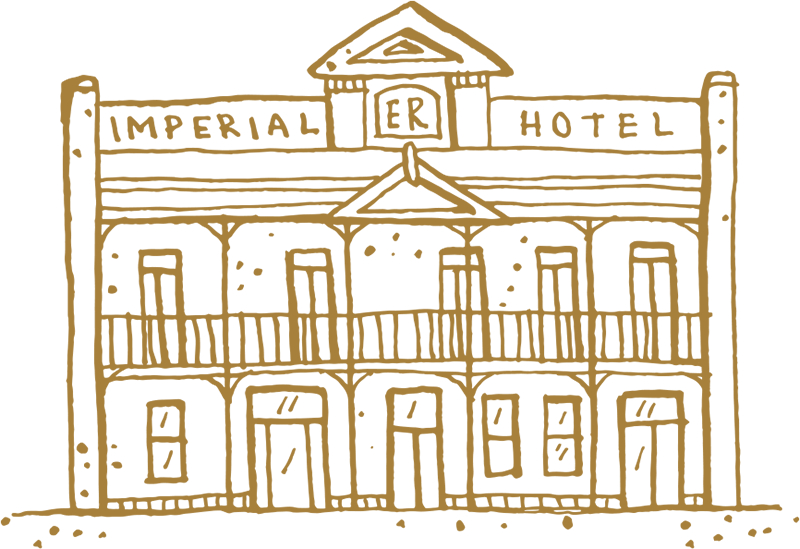